Love In The Afternoon~must see 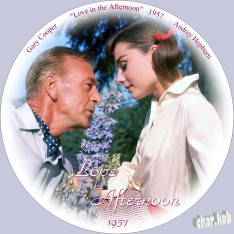 Audrey Hepburn and Gary Cooper make the movie a delightful light-hearted love story by Billy Wilder based in France. A story that includes a seeming, exotic, forbidden, dangerous love. A love I have felt before so I felt I could relate a bit. The movie is based on a Wild Philanthropist ~ Cooper who was investigated on several occasions by Hepburn’s father a Private investigator. Chevalier, Hepburn’s father shares many of his jobs with his daughter who becomes a bit intrigued by all of Cooper’s love interests. On an overheard conversation Hepburn decides to go to the Hotel to save Cooper from imminent death from a husband who was surely going to shoot him out of jealousy. From there the mystery of Hepburn intrigued Cooper. She left him in the dark about who she was, along the way making herself a wanderer of the world through her father’s prior cases.

Well from this Cooper becomes most intrigued maybe in love by this mystery girl and hires Chevalier to investigate Hepburn. Not knowing that he was Hepburn’s father. Well Chevalier put two and two together and broke the news to Cooper and begged him not to break the heart of his innocent daughter who now was madly in love with Cooper. The final scene was most touching, as Cooper packed up to go, and leave this girl who intrigued him, and Hepburn who played this girl who wasn’t going to portray the typical love struck girl; they walked to the train station bragging of who they were going to be with, spend time with, all along knowing they were both lying to each other. As Audrey chases the train as it rolls along, Gary snags her up into his arms and pulls her into the train. And with that tears rolled down the faces of all, to include me.

This was far from the usual film Cooper played, the rugged cowboy, but not a film far from what he was, having had many affairs in his lifetime. He did settle down and married and then converted to Catholicism. He was very ill in this film with prostate cancer that had spread through his body. He was 57 and Audrey was 27, and you would never guess there was illness on the set. It was filmed In Paris at the Ritz and there were few scenes outside the hotel that were beautiful as well. There was no dress designer for Audrey in this movie, she wore her own wardrobe throughout the movie.

3 Responses to Love In The Afternoon~must see

Stuck in Sydney and posting old photos I've taken with various camera phones over the years. To make it more interesting, now in Black and White with sarcastic commentary.

Cooking with a Wallflower
Chrismartinwrites

...not the stereotypical picture