THE END OF AN ERA

It was a sunny day in October 1987. I was optimistic young girl , just married, going to culinary school when I happened upon a restaurant I never knew existed. The Oregon Electric Station had been around for years, but somehow I never knew about it as the world of restaurants I lived in was very limited. I took my resume in and filled out an application. The manager at that time asked me to come back for a formal interview. Three weeks later I was working as a hostess at the Oregon Electric Station. It was a perfect fit for me as I worked week days at the restaurant and was able to still attend classes and have weekends off. Oh and I got tips!!! Huge bonus for me. 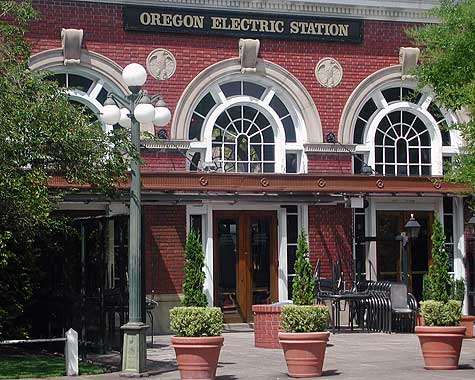 After I did my opening chores of polishing all the brass, cleaning the windows, cleaning out ashtrays I would look for things to do before and after the lunch rush. I would venture back to the office to see if one of the bookkeepers had filing or typing for me to do. Usually they could find me some things to do. The restaurant had such a large lunch client that we would be non stop from noon till about two pm. It was known as the place to go to have a POWER LUNCH.
The gain in that little bit of office landed me a role in the back office doing mostly bookkeeping. I still would occasionally wander up front to help if I was needed.
Four years after I started I became pregnant with Kels. My husband was fairly confident I didn’t need my job and I could be a stay at home mom. My boss agreed but asked if I could still come in occasionally to allow the other bookkeeper reprieve for vacation etc.
That worked well for a while but they needed someone full-time. They hired my sister. Thirteen months later I was having my son and there was no way we would be able to make ends meet if I didn’t go back to work.

I spoke with my boss and since my sister was working in the office he decided to put me on as a manager. But he wanted me to learn all the aspects of the restaurant from, waitress, to bar-tending to cocktail server. It was a few months later I had business cards with my name on it and assistant manager title. I supervised all front of the house employees on nights that were super busy or nights when the other two managers were off. It was a great deal of fun for me. I am a people person, so this brought me great pleasure to be able to interact with employees and guests of the restaurant. Sure, I had an occasional problem that would require a bit of stress and quick thinking.
There were plans on building a new brewery down the street and I was again asked by my boss if I could please help out in the office since the workload was increasing. The one brewery would soon be five and I was in charge of all the human resources, menu layout and printing, etc etc.
I did this happily for about six years when I found out we has baby number three oh the way. Well this time we were both certain I should give proper notice and not pay the enormous child care bills and be with her.
My boss really asked if I could please stay and he would do all to accommodate around the baby including bringing a playpen into the restaurant and having her with me. It seemed to work well because not only did she get lots of love and attention from everyone around her. She was the little office girl everyone was excited to see. She was spoiled rotten.
Well now it is almost 27 years later and I am still in the office doing the payroll etc for two breweries and one Oregon Electric Station. And a few nights a week I am a waitress making a few extra bucks for all my fly fishing trips and miscellaneous bills.
I was told two weeks ago my boss was going to sell the restaurant, and just keep the two breweries.

Someone new will be taking over the Electric Station and turning it into a High end Italian restaurant. I am unsure who will get rehired or if the new restaurant will be starting all fresh.
A long era of a successful Steak and Seafood house is over. A large void sits in my mind and heart thinking of all the years I have spent here, mostly good~some bad.

THIS IS HOW THE ANNOUNCEMENT WILL GO:

IMPORTANT INFORMATION FOR ALL EMPLOYEES

THE OREGON ELECTRIC STATION HAS BEEN SOLD AND WILL BE CLOSING FOR REMODEL STARTING APRIL 1, 2014. THE NEW OWNERS HAVE TOLD US THAT THEY WOULD BE INTERESTED IN KEEPING EXPERIENCED PEOPLE THAT KNOW THE TOWN AND THE CUSTOMERS.

IT IS IMPORTANT THAT EACH OF YOU UNDERSTAND OUR APPRECIATION FOR YOUR HARD WORK AND LOYALTY FOR THE PAST 28 YEARS. WE HAVE ENJOYED HAVING THE OREGON ELECTRIC STATION, IN GREAT PART, BECAUSE OF OUR EMPLOYEES. IT’S BEEN A FUN RIDE, AND WE WILL MISS ALL OF YOU.

My mind has been in a fog since I was told one week ago. I did not know the restaurant had already been purchased by someone else, I just knew it was closing for a bit to get the old building back up to snuff.

3 Responses to THE END OF AN ERA

For Fashion and a Whole Lot More

Australian Traveller that loves to "Roam" our globe, creator of ENDLESSROAMING.COM sharing the experience through word and photography. Heading to the USA this coming June